The Dual Functions of a University Professor

The Dual Functions of a University Professor

These are tough economic times, and universities share in the pain. The University of Prince Edward Island is going to learn to live with cuts to its provincial funding.

As usual, there will be those who feel that professors "don't work hard enough" and shouldn't complain.

But the "job description" of a professor is unlike that of any other occupation.

Let's say you're an accountant or a salesperson. Your work - most likely done at the place of business - is fairly structured and set down by the people who employ you.

If you work at other things on your own and "off the clock," this would probably have no bearing on how well you perform on the job. Indeed, some employers might look askance at this, feeling you were spending too much time or effort on other matters, instead of on behalf of the company that pays your salary.

But things are very different for an academic. Teaching and administrative tasks are, obviously, done at the "firm" - in this case, the university. There are set schedules for classroom time, office hours, and the various other duties involved in running your courses.

This part of the job is similar to that which one finds in other professions.

But there is an entire second aspect to the work, one which many outside academia are less aware of, and which may, in the long run, be even more important: research and scholarship.

Other than providing a venue, and sometimes, grant money, the university itself has little to do with this. It is done mostly outside the formal university structure.

Presenting papers at conferences, publishing scholarly articles and books, editing journals, reviewing books, refereeing proposals, and interacting in a myriad of ways with others in one's field (scholars who can be anywhere in the world): this is to a large extent up to the individual professor.

There are no set rules or structures in place and much of it is done elsewhere - sometimes thousands of miles away.

In this part of the job, you're in effect an independent operator. By the same token, so is your colleague down the hall. You may have no idea what he's working on.

Yet not only does this part of the job have a bearing on how professors are evaluated, for tenure or promotion, but it might, in the long run, be the most important, and long-lasting, part of our work.

No academic should minimize the important of teaching students and imparting to them the knowledge that we, and our colleagues elsewhere, have worked so hard to create.

But nonetheless, few people, 30 years from now, will remember what we did in the classroom. However, they might still be reading, and learning from, the articles and books we produced as academics. Our true legacy will be our research.
Posted by Srebrnik at 11:23 AM No comments:


Why the Republican Adulation of Ronald Reagan?

Not a day goes by without some aspiring conservative American politician calling himself an acolyte of Ronald Reagan. The 40th president of the United States has become an icon in the Republican Party.

It tells you how far the party has moved to the right ideologically. In the past six decades, there have been six Republican presidents: Dwight Eisenhower, Richard Nixon, Gerald Ford, Reagan, and the two Bushes. Yet few current Republican hopefuls running for office mention the other five.

Eisenhower, Ford and George H.W. Bush were too liberal by modern Republican standards, Nixon resigned in disgrace due to the Watergate scandal, and George W. Bush remains too “toxic,” thanks to the wars in the Middle East and the financial collapse of 2008.

Yet Reagan seems beyond criticism, a president who walked on water. To Republicans, he has become a secular saint.

Of course such adulation depends on political amnesia. I worked in the United States between 1982 and 1990, including four years as a journalist in Washington while Reagan was president, and I don’t recall him being idolized at the time.

Yes, Reagan helped end the Cold War. People still remember his 1983 speech referring to the Soviet Union as an “evil empire.” But what were his other foreign policy accomplishments? The record is, to say the least, mixed.

Take Lebanon: American forces had been sent there in September 1983 as part of a Multinational Force to help the Lebanese government during that country’s horrific civil war. On Oct. 23, 1983, truck bombs driven by suicide bombers attacked the U.S. Marine barracks in Beirut, killing 241 American servicemen. In early December, eight more U.S. Marines were killed.

At first, Reagan said the Marines would stay on. But as the civil war intensified, Reagan ordered the Marines to begin withdrawing from Lebanon; they were gone by Feb. 26, 1984. The American presence in Lebanon had accomplished very little.

Perhaps as a diversion, the president had also undertaken an invasion of the tiny Caribbean island nation of Grenada on Oct. 25, 1983, just two days following the debacle in Beirut. It was meant to overthrow a left-wing regime that, Washington feared, might become too friendly with Cuba, as well as, ostensibly, to protect American medical students enrolled at an island university. The action was criticised by the United Kingdom, Canada, and Trinidad and Tobago. The UN General Assembly condemned it as “a flagrant violation of international law.”

In April 1986 terrorists bombed the La Belle discotheque in Berlin. Two American soldiers were killed and more than 150 people were injured. Libya’s Moammar Gadhafi was blamed and the president authorized strikes against targets in Tripoli and Benghazi. Though Reagan at the time called Gadhafi “the mad dog of the Middle East,” no further action was taken against the Libyan dictator, who two years later would blow up Pan Am flight 103 over Lockerbie, Scotland, murdering a total of 270 people.

One could also blame Reagan for the current mess in Afghanistan. After the Soviets became embroiled in that country, Reagan was the one who sent billions of dollars in military aid to the mujahideen fighting the “godless Communists,” including Stinger surface-to-air missiles to shoot down aircraft.

The Soviets lost the war and left in 1989, but Reagan's “freedom fighters” would later morph into the Taliban, who eventually created one of the world's most repressive regimes -- plus providing a home for Osama bin Laden’s al-Qaida.

Regan’s greatest foreign policy disaster became known as the Iran-Contra affair. It almost led to his impeachment and also resulted in the Republican Party losing its majority in the U.S. Senate in November 1986.

It started in 1985, when the administration secretly began supplying weapons, including missiles, to Iran, in hopes of securing the release of hostages held by the Iranian-backed Hezbollah movement in Lebanon. On account of the Iran-Iraq war, restrictions on arms sales to Iran were in place at the time.

The illegal sales, using Israel as a go-between, were carried out by members of the National Security Council, including two National Security advisors, Robert McFarlane and John Poindexter, and Lt. Col. Oliver North, an NSC staff member.

At North’s suggestion, the millions of dollars received from the weapons sales were then sent, also contrary to U.S. law, to the right-wing “Contra” guerrillas fighting the pro-Cuban Sandinistas in Nicaragua.

The Lebanese magazine Ash-Shiraa in November 1986 exposed the weapons-for-hostages deal.

A special review board created to look into the matter found Reagan accountable for a lax managerial style and aloofness from policy detail.

Though it could not prove definitively that Reagan had known about the secret arms transfers and Contra support, Congress on Nov. 18th, 1987 stated that he bore “ultimate responsibility” for wrongdoing by his aides, and that his administration exhibited “secrecy, deception and disdain for the law.”

McFarlane, North, Poindexter, and Reagan’s defence secretary Caspar Weinberger, all faced criminal charges as a result of Iran-Contra. North and Poindexter later had their convictions quashed, while McFarlane and Weinberger were pardoned by George H.W. Bush.

North, for one, always insisted that Reagan “knew everything” about the arms-for-hostages scandal and lied about it.

This is not exactly the stuff of greatness, but for some reason, Reagan has become a larger-than-life figure among Republicans. His failures and foibles have been shoved down the memory hole.
Posted by Srebrnik at 10:10 AM No comments:

The Dismal History of Tropical Islands 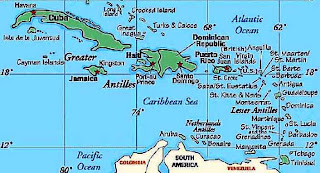 Our image of tropical islands tends to emphasize their beauty and serenity. They are vacation destinations, often referred to as “paradises.”

If you’ve ever visited one of these lush places, you know how delightful they can be. Sun, surf and sand – who could ask for more?

But for centuries many of them were ruled by powerful European empires that turned them into brutal plantation economies, where sugar cane, coffee, tobacco, and other crops were produced by a workforce of slaves transported from Africa.

The Iberian kingdoms of Portugal and Spain were first off the mark to exploit slave labour on plantations. In 1425 Madeira, off the coast of Morocco, was colonised by the Portuguese and by mid-century it had become the largest single producer of sugar in the Western world.

By the sixteenth century almost all of the Atlantic Islands -- the Azores, the Canaries, the Cape Verde Islands, São Tomé, and Madeira -- experienced sugar booms.

By the end of the eighteenth century, literally millions of Africans had crossed to the Atlantic and Caribbean Islands and to the Indian Ocean islands of Mauritius and Réunion, as well as to the mainland of the Americas. British–ruled Jamaica and French Saint-Domingue (now Haiti) on Hispaniola had become the largest slave societies in the West Indies.

For many Africans the starting point for this crossing was an offshore African island – a place that made escape impossible while awaiting transport to the New World. The French-owned island of Gorée, off the coast of Senegal, became such a transit point.

The Atlantic slave trade came to an end in the early part of the nineteenth century. Slavery itself was abolished in the British Empire in 1833, in Danish and French possessions in 1848, in Dutch colonies in 1863, and in Portuguese ones in 1869.

On Hispaniola, the French sugar colony of Saint-Domingue had won its freedom in a revolution that ended in 1804 and slaves in the Spanish part of the island (now the Dominican Republic) were also emancipated. Slavery was not abolished in the other Spanish islands until later: in Puerto Rico in 1873 and Cuba in 1886.

Off the eastern coast of Africa, the Indian Ocean islands of Unguja and Pemba, known collectively as Zanzibar, have an even more sinister past. 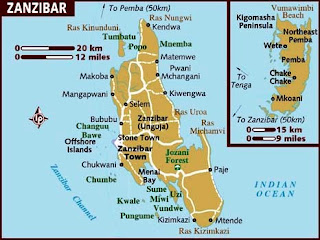 Ruled by an Arab dynasty from Oman on the Arabian Peninsula, Zanzibar was a slave entrepôt, where Africans from the interior of the continent were sold to buyers in North Africa and the Middle East. Merchants from Oman and India settled in Zanzibar to participate more directly. There was also an earlier Persian influence.

Captives who survived the long trek from the mainland were crammed into dhows bound for Zanzibar, and paraded for sale in the capital. The main island was East Africa’s main slave-trading port, and in the mid-19th century as many as 50,000 slaves were passing annually through its slave markets. Slaves also worked in the clove plantations on the island.

Zanzibar was, as journalist Ryszard Kapus'cin'ski described it in his 2001 book The Shadow of the Sun, “a sad, dark star.”

In 1890 Britain established a protectorate over Zanzibar and ended the slave trade. The British left in 1963 and local African revolutionaries soon thereafter overthrew the Sultan of Zanzibar and his mainly Arab government, killing thousands of Arabs and Indians.

Zanzibar is now an autonomous part of Tanzania, united with Tanganyika on the mainland.

Though often forgotten today, the former exploitation of these tropical islands and their unfortunate inhabitants remains a grim and violent page in world history.
Posted by Srebrnik at 11:16 AM No comments:

Creating the Chupah: The Zionist Movement and the Drive for Jewish Communal Unity in Canada

Jerusalem on the Amur: Birobidzhan and the Canadian Jewish Communist Movement, 1924 - 1951